S. 2155 includes a provision clarifying that a manufactured housing retailer or seller is not inappropriately considered a mortgage “loan originator” simply because they provide a customer with some assistance in the mortgage loan process. S. 2155 passed the House on Tuesday by a strong bipartisan vote of 258-159 and the U.S. Senate in March by a vote of 67 to 31. MHI thanks the Representatives and Senators who supported this important manufactured housing provision. Click here to see how your Representative voted on S. 2155 and here for how your Senators voted.

When S. 2155 was signed today, Senator Donnelly (D-IN) said, “Manufactured housing serves as a vital source of affordable housing for millions of hard-working Americans, particularly in rural and underserved communities. I’m pleased the President signed into law my bipartisan regulatory relief package, which includes a provision based on my Preserving Access to Manufactured Housing Act. This provision provides a common-sense exemption for manufactured home retailers to ensure consumers can receive general financing information.”

In celebrating the passage of S. 2155, Senate Banking Committee Chairman Crapo (R-ID) said: “This is a moment years in the making, and I thank my colleagues in the Senate and the House of Representatives for their partnership and contributions to this effort over the years. This step toward right-sizing regulation will allow local banks and credit unions to focus more on lending, in turn propelling economic growth and creating jobs on Main Street and in our communities. This is an important moment for small financial institutions, small businesses, and families across America.”

Referring to S. 2155 as the most significant pro-growth financial regulatory reform in a generation, House Financial Services Committee Chairman Hensarling (R-TX) said, “For far too long, far too many people in our country have struggled to make ends meet. They’ve struggled to buy a car; they’ve struggled to buy a home; they’ve struggled for their version of the American Dream. Why is this happening? Because Main Street banks and credit unions that Americans depend on have been stifled by the weight, load, volume, complexity and cost of heavy Washington bureaucratic red tape which has prevented them from serving their communities. But today, that changes.”

S. 2155 becoming law is a result of MHI’s ongoing efforts to protect manufactured housing retailers and sellers from liability under federal consumer protection mortgage rules for the loan portion of a consumer transaction. MHI has continually argued that if a retailer or seller does not receive compensation or gain related to the loan, they should not be considered a loan originator simply because they help borrowers identify potential lenders or provide minimal assistance during the loan process.

MHI’s government affairs team worked closely with both Senate and House leadership and congressional champions of manufactured housing to secure passage of this important provision. The grassroots outreach from MHI members and state executive directors – totaling more than 20,000 calls and emails – was instrumental in helping members of Congress understand the importance of this provision to their constituents. MHI succeeded over the last few years in getting a similar provision included in several previous House-passed bills (H.R. 1699, H.R. 10, H.R. 650, H.R. 1779 and FY 2017 and 2018 appropriations bill), as well as a freestanding Senate manufactured housing bill (S. 1751 and S. 682).

If you have any questions, please contact MHI’s Government Affairs Department at 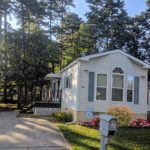